Also, I found the root of the flags problem, the “flags” variable is not defined.

Yes, I considered that, and I used a special algorithm to detect visual differences between colors using CIELAB color space However, I’ve decided to remove that feature entirely. If one wants to have custom colors, they still can use the Custom Colors script.
The problem with the flags was deeper - this was the one, I’ve talked about in post #496 (the one with new users). I have fix for that, but it’s still on my local repository, because I’m working on rebuilding some other parts and want to push them all together to the public repo.

REMOVED the custom colors section
ADDED list of built-in avatars (with possibility, to load a custom avatar)
BROUGHT back part of the badges section to the Profile tab
REMODELLED the look of the Profile tab
FIXED impossibility to save anything for a new profile and some other bugs

If something (anything) doesn’t work, let me know.
If you have suggestions for the flags list, please post them here. 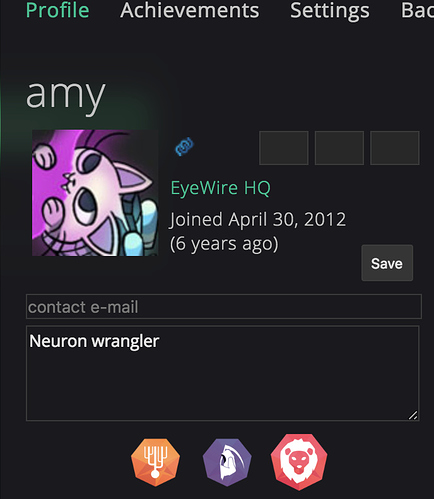 Because RawGit turned off ability to add any new links and will be permanently down in a year, I’ve changed all the links to the scripts to GitHack.

And here are the new links from GitHack. They are to use via the EW Addons feature (available in the Settings menu):

ADDED an option to highlight all cubes in cell, which aren’t SC-able - cubes, that already have 2 votes, that have one vote given by the player, that are admin or scythe frozen, stashed or low-wt.

The option is turned off by default. To turn it on, go to the Settings menu and switch the appropriate option: 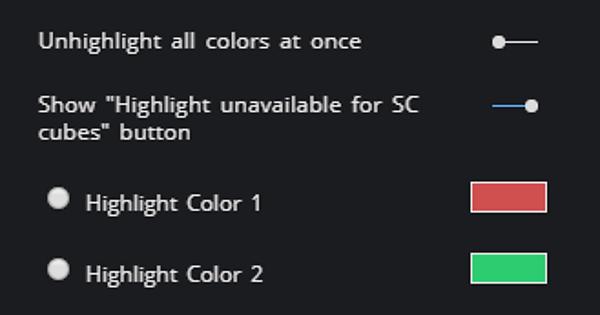 After that, a mauve colored button should be visible in the Inspection Panel:

When you click on that cube all non-SC-able cubes will be custom highlighted.

The highlight will stay forever until you go to the root cube and unhighlight all children or delete the cell from the list available after clicking the H button in the Inspection Panel.
The cubes aren’t refreshed automatically, so you have to either click the mauve button again to update the data or just highlight each button you’ve SC-ed (e.g. by pressing C+C, then V+V on your keyboard).

Not 100% sure, if that option will be useful, hence it’s turned off by default.
I was going to highlight all the cubes, which are available for SC-ing, but afer some thinking, I realized, that it would masked the info, if the cube is a duplicate, flagged or something else is wrong with it.

Let me know, if the function is useful to you.

EDIT:
Apparently, the automatically highlighted cubes won’t stay between refreshes, only those hand-highlighted. I’ll fix it soon, if needed.

EDIT 2:
Fixed the aforementioned problem (in v. 1.5.1.1) because it was wider and the highlighting disappeared also after inspecting any cube.

EDIT 3:
in v. 1.5.2 when you right click on the button all highlights will be gone. It applies also to all the highlights made by hand.

hey @Kruk
As to “cubes completed in cells sc’d”: Could you just show when i open menu, how many cubes i can sc? (i must so many times click check…)
thanks

Hmm, I think, I can do it. It will be a little bit slower (I think, 4 requests per row versus 1, as is currently), but should be much slower. Wil see, what I can do

Though if it gets slower for others, not as urgent

So the new version of SC History is 1.2 and it has automatic sc-info (without the now unneeded “Check” button).
As a reminder: to update any script (actually, all installed scripts at once), left-click the TamperMonkey icon, click “Check for userscript updates” and wait a couple of seconds. Then refresh the EW page and everything should be updated and working.

yay! It works! Thanks!

Profile History v. 1.0.6
ATTEMPT to fix the problem, that in some cases the yesterday’s values weren’t displayed (thanks @twister2 for the report)
I sort of assumed, that at any given time all around the world is the same day, lol.

I don’t have capabilities to keep up with advancements, but I’m really glad you’re actively making EW have a better platform like everyday

I’ve been SCing more recently and only now I uderstood, how usefull it’d be, to have some shortcuts for the usual SL operations.
So, thanks to @Kfay’s suggestion from a couple of months ago, I’ve added six small buttons for the most common logs. After updating the script, you should see something like this in your SL toolbar:

Meaning of the buttons:

You can use the buttons both in the inpection and in the overview mode (you have to have a cube selected in ov, just like with regular SL).
After pressing any of the buttons, there will be displayed a short yellow vertical line next to the buttons. The line indicates, that the report is being sent. When reporting is finished, the line will diseappear.

You can hide the buttons in the Settings menu (Utilities category, “Scouts’ Log shortcuts” option).

I suppose, there will be some errors, so don’t hesitate and report them here.
Also add any suggestions, if you think, some other reports are very common, or some of the already added aren’t useful, or the Notes for the reports should be different, or anything else.

As for the colors of the buttons - I’ve chosen them quite randomly to be as visible as possible with the small buttons.

If you’re not sure, what each button does, just hover over the button for a second and there’ll be a small popup saying something like “nub”, “branch” or “Watch / Test Extension”.

You can, of course, still use the SL the normal way, even with the buttons shown.

Buttons are available for Scythes, Mystics and Admins, since Scouts wouldn’t have any use of them.

Man THIS IS Awesome ! I tried to instal utilities 1.10 with TM and hard refreshing the tab , but i do not have the option to activate it.
Anyway… just Thanks !

Hmm, it should be activated by default.
During testing sometimes the buttons didn’t show, but I wasn’t able to reproduce the problem more often, so wasn’t able to fix it, but I’ll try some more. For now, just try to refresh the page until the buttons show.

yes good, it work now ! Thank you a lot

as always you made my day

Could you replace Dust by Duplicate ? I think it’s more interesting

I happen to use the dust button a lot, so I’ve decided not to replace it by anything. However, I’ve added 2 more buttons. Also, changed the dust button’s name from “D” to “d”.