Here’s a beta layout for tabbed Cell Complete notifiaction that would provide detailed stats on Reaped and Completed cubes. Thoughts? 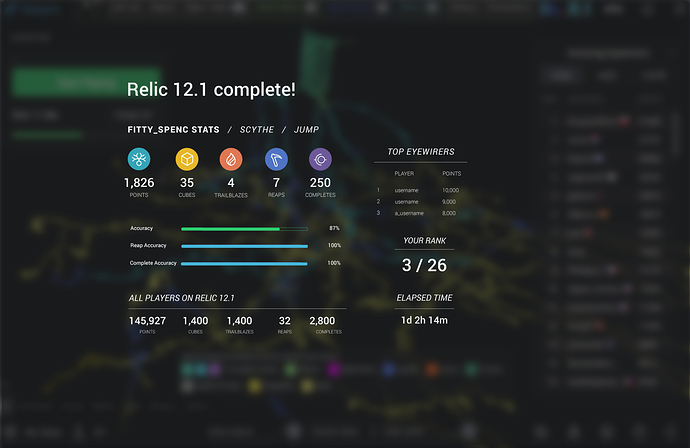 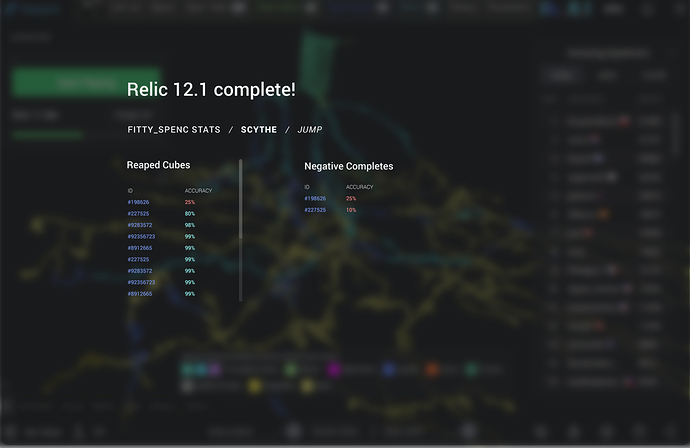 This will come with a revamp to the complete bonus system - there will be the potential to win many more points (50 points per cube with 1,000 point bonus for Completing 25, 50, 100, and 200, cumulative) but the bonus will only be awarded if a player has a minimum accuracy. That exact accuracy number is still TBD.

In theory this sounds like a great idea, but i have a few questions

with admins virtually not reaping in ew cells anymore after theyve been released i think we will all be getting 99,.999’s% lol per cell until scythe reap overs calc. But I’m in fav. of remaining 5k for 100 scs and 2.5k for 50 scs. nice and simple.

also say i sc a cube, admin reaps it, and i re-sc after the admin reap, what happens to complete accu for that cube then (assuming admin doesnt also complete the cube after he/she reaps it)? bc neg sc accu becomes pos if re-sced after admin reap the way i understand it.

I’ll let @devonjones answer the first part - the GMs definitely do still check over the cells.

We pulled some stats and with the new schema it would yield a lot more points to the heavy scythe completers, of which you are one @Nseraf . Right now there’s no incentive for players to SC more than 100 cubes, other than occasional badge.

admin would only reap over SC if there is something to be changed, so that cube would count against you. there’s no reason to re-sc on a cube reaped by admin.

We’ll be adjusting the system to lock cubes at SC 1 and lock Admin reaped cubes from regular play by disenfranchised players.

yeah we won’t be taking away SC points. But we do want to help players land on leaderboard by spending time SCing

Admins do indeed still check over cells before they are completed. You may have noticed reduced admin reaps because, as we’ve generally found, once a branch is double-SC’d the issues on it have usually been corrected by a Scythe reap. This has led to a high level of trust in double-SC’d branches. However, Grim has remained watchful; periodically for example there are false extensions that get removed not long before the cell is taken down. It will be interesting to observe what patterns emerge and what procedures we might find are useful once we’re quantitatively measuring SC accuracy!

I thought the reason why there weren’t unlimited bonuses to begin with is because y’all wanted to encourage as many scythes to get the bonuses as possible? I typically SC only a little past 100 in each cell as it gives more scythes opportunities to get the bonuses, I feel greedy otherwise. I can definitely SC more, but don’t want to be viewed as taking opportunities away. 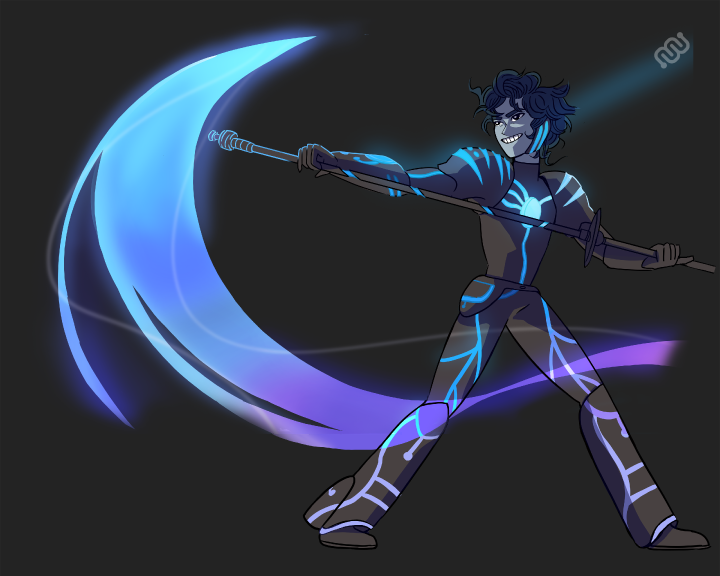 Now, when you Scythe Complete enough cubes in the same cell, you earn up to 5,000 points once the golden completion announcement appears in chat. Scythe Complete 50-99 cubes on a cell for 2,500 bon…

Why aren’t there more tiers? Doesn’t this mean I lose the incentive after SCing 100 cubes?

There are only two tiers because we want to a) encourage as many Scythes as possible to SC, and b) minimize SC votes that are given just to obtain the bonus. If we gave higher bonuses for SCing several hundred cubes, it would be unlikely but still feasible for a pair of Scythes to mass-complete all available cells without leaving opportunities for other Scythes to do the same. We still encourage anyone who already SCs whole cells to continue doing so, as long as you stay in communication with fellow Scythes about which cells you’re on and use the complete parents/children function with some awareness for what others may be doing. We have formalized a 50-cube tier to account for how some Scythes find it easier to complete that many on cells where other Scythes have already gone above and beyond.

I am guessing the admins have seen that a lot of big cells have been lingering a long time becuse people do not want to sc after their 100 sc are done. Also on some cells you can have 98 sc but still think you had sc 100+ because a cube or branch was stashed or someone unsc your cube after you was finished. or there was few cubes to little.

Because of this i am all for making each sc count but i will admitt that 50 pts pr cube sounds like a lot, i think it is 5 pts per cube now.
On the other hand you usually lose a lot of points doing sc (or mystic) instead of playing.

I think it’s an effort to increase Cell Completion Rate (again) which I wouldn’t be surprised if it’s suffering by how few players have been left in game (and even fewer are scythes/mystics) so I’m guessing HQ’s thinking is this “we used to have (example) 10 scythes and now we have 2, give the 2 more incentives to sc more, so CCR isn’t suffering as much as it is now and hopefully if we tie the “huge” bonuses to accuracy they won’t be completing without checking.”

But I could be wrong.

As I see it, this is not about increasing completion rate and more about the following two things:

So in that vein…

This isn’t the case. We’re not under pressure to increase speed.

The current system was put in place for simplicity since points were manually awarded. There is currently no incentive for players to SC over 100 cubes - that will change.

We’re likely going to decrease the points per SC cube. Does 25 seem reasonable?

I cannot answer for all scythes, hopefully more than me will answer here. But for me, at least, unless i’ve got some strategic reason for trying to get a cell completed as fast as possible, I SC a few cubes over 100 and leave the rest for other players so that there is plenty of opportunity for all.

I’m not going to say no to more points ofc, but if y’all don’t want us to save cubes for others to SC you’ve only to say so

I would be interested to know @dragonturtle 's opinion as dt definitely does the most completing, but they are on vacation rn

Thanks for whoever made this appear in my email.
I do tend to SC more than play, just what I prefer at this time. I also will get my 60 on the smaller cells and 120 on the larger ones, and let others get theirs. if a larger cell has been sitting for a few days I will then SC more to help get it completed sooner. I would be glad to get more points for completing beyond the 100, say another 2500 for each 50 done.cant comment on The new notification since I left just before the first one came out.

Diminishing returns after 100 perhaps? Get the normal 5000 for the 100, then after that they’re worth less? Or is that overcomplicating things too much?

Yeah, I’m one of the few who do more than 100 scs (per cell), I was doing it before sc bonuses came to be and I’ll do it after, I never did it for the sc bonuses. I did/do it b/c I like going through branches and reaping stuff in/out and b/c I like increasing the sc # in my profile. The only good thing the sc bonuses have done is they have made the ever increasing # between badges (in pts cat.) a little easier to overcome.

My observations from cell completing/scouting (with non-stop playing/scouting/scout+scythe training activity since 2013) is that out of the players who get scout (promo) few like it (really), most don’t want the responsibility, they like the new chat colour and the badge and the access to the /gm scouts but they dont like or want the responsibility, a lot have also said how it’s confusing from having nothing pre-scout to everything all at once they get at scout, so out of the few (players) that go for scouts most dont actually like to scout, if they log anything it’s from whatever wrong they find during their normal play, but few go through branches and find stuff flag and log them.

Then out of the few who have gotten scout even fewer remain and/or want to get scythe promo and even less so after getting it (scythe promo) check branches, complete/reap etc them. Combine that with a heavily diminished playership pool the last 12-18 months and it’s a big reason why we don’t have an increasing # of active mystics (imho).

My observations of when a player is likely to leave ew (for good) it’s in order:

So, imho unless you guys (HQ) can find a way to make branch checking appealing/fun in more ways than complete points in profile and/or sc bonuses after a cell’s done not many are going to do it and/or not many are going to do a lot of it. My guess is that if you add new/more tiers ppl will go for the top tier-bonus giving and stop there, if that (if they dont stop to a middle/lower tier).

But I think this more or less may need/require a complete overhauwl of the ranks/promos, how they are perceived, how they are attained and what “value” they have, bc in my opinion the constant degradation of the requirements for scout and scythe have not had the desired results, we don’t have an army of ppl from diminishing what is required (at least in terms of time participation, pts and cubes required), if anything we have an increasingly less # of ranked ppl. Idk what the solution is, altho imo it should be a mother…to get a rank bc then it has value. Much like diamonds and luxury cars have the desirability they have exactly b/c few ppl can have them and “everyone” wants them and that kind of lifestyle but only very very few can actually have it. If, for example, ferrari was to decrease the price of its cars to say 20k $ from 200k$ everyone would get 1 and soon after no one would want one, but then again this also requires a large player base to start from.

I think once again it comes down to if you/we want more active, completing-branches/cells, scythes we need a (much) larger player pool/playership which to have needs an intensely more active chat bc imho the reason why ppl play online games is to connect with other ppl, a dead chat won’t give you new/more scouts or scythes. It may not be 100% this but my thought is this: it’s not for science! it’s for community!, it’s that we play to have fun, to connect with ppl and science benefits from us doing that.

I am primarly playing in the mystic cells but try to take some periods where i am only doing sc, when i do that i start at the lowest cell in the list and do my 100 sc in each cell (or how many cubes are avaiable) untill i have done all the cells or are getting bored. In big cells i try to do more cubes and in small cells i stop right over 100 because then i will not get more points for the work.

i you remove the tresshold value or make it worth less you could very well get people completing less because they no longer have a clear goal. but a few points for each cube and/or more tressholds would be a reward for people that do more completing.

I do a lot less completing now than i did before, because it lost much of the fun for me after the whole disscusion about sc- children and uncompleting each others cube.

i agree with nik about the long way betwheen badges