There are times when Explore mode comes in extra handy for being a second color. Why not let level 2 (or invent a level 3) players at some extra selection tools to trace neighboring cells through particularly nasty parts of difficult cubes?

These partial traces can then provide an additional data point when that cube comes up for those cells’ traces. I would make the only score incentive better accuracy on the primary cell to discourage fully tracing neighbor cells needlessly.

what you line up here sounds a lot like the scythe tools where we can make child or parent cube visible as a shadow to help finding the right trace. it is not a option open to normal players because even if a trace is in the parent it does no mean it is correct or that it should be in the cube you are working on even if it is. If you can´t find the trace from inside the cube it is usually best to leave it out so long another cube have the relevant trace to not tank the accuracy of a player that did his/her best out from the info avaiable.

colours
when a scout or scythe inspect a cube you can with deafult colurs have light/dark blue +explore like you also have and can also see different colours from red too dark purple if not every player have added the piece (usually pink or purple now, but other colours on some old cubes) we can also see orange, yellow or light green pieces if that piece is also in another cell. If for some reason we also need help from a mentor that will also bring two new colours.
but agree that having two explore colurs might be useful on the more difficult cubes

Similar ideas, I suppose.
To simplify the idea to something that won’t need so much training: Dark Select/Dark Explore for level 2 players to trace cells they know aren’t in the one they are supposed to trace so they can solve tricky spots through the process of elimination. Besides, it would be cool to have an extra tool upon finishing the secondary training. 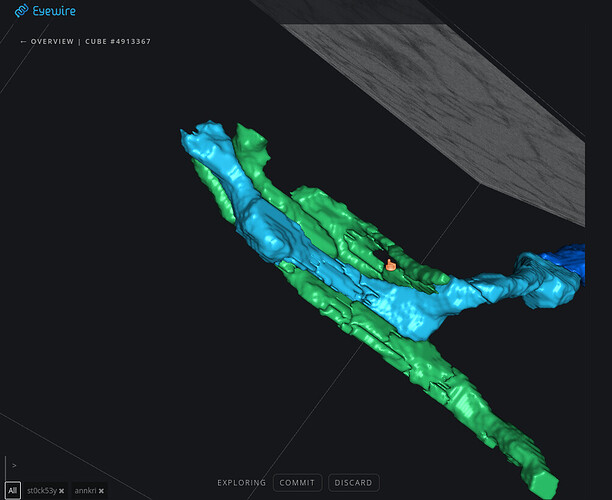 image1006×821 103 KB
I found a tough spot to illustrate my idea to see if we are talking about the same thing. I have parts of at least three neurons selected in Explore mode here with a giant one deselected as a view point. I would dearly love access to multi-colored Dark Explore mode to trace tight spots like this. In fact, if it weren’t for this brainstorm here, I probably would have missed the bit on the left.
annkri April 17, 2022, 11:43am #5 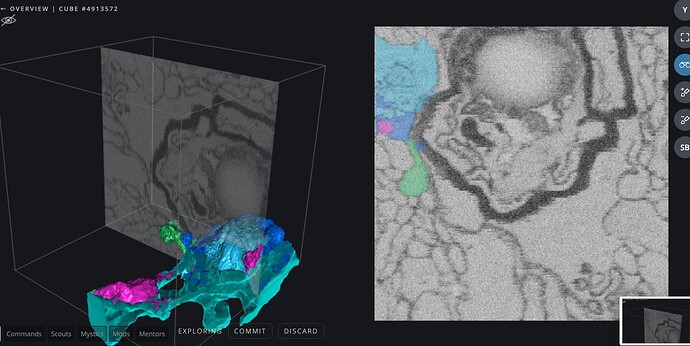 Thank you for sharing with us your ideas! As annkri has explained we have a few extra tools for Scouts – if you’re interested, you may want to apply for Scout promo (we have them at the end of the month).

I agree that over the years there have been requests for a second “Explore” coloring option. I’ll mention it again to rest of the team. It’s a fine balance between offering enough options and having too many trace colors that could cause confusion as to the “real” trace a user is working on.

I will mention that based on how Eyewire’s “spawn” system for new tasks/cubes works, it is very rare to trace a branch from a different seed piece in the same cube. Even though the branches may be in the same area of the dataset and located next to each other in the cube, they all had different starting points (seeds). Eyewire uses a hierarchy system of parent cubes with child cubes. A parent cube may have multiple overlapping child cubes that ensure that nothing has been missed (due to the overlap system this is why sometimes it may seem like you traced the same area of a branch multiple times).

I already have applied.

If confusion over the “real” trace is an issue, then perhaps it would be best to leave a toolbox for identifying faint traces to a proverbial level 3 player with some list of experience:

Only then do you let players at the toolbox training, where they have to get through a number of the worst known evil cubes.

Hide the tools after each cube and set it back to normal select/normal explore if they’re active when done. Maybe even make find some set of colors that fit the Eyewire aesthetic, but are all distinctly darker.

i don´t think the use of several explore colours would be confusing, mostly i think people would chose a colour they like and mostly use this, like i almost always use explore colour for my trace because i think that it is better to use a colour with more contrast compared to the seed. You already have the confusing part in beeing able to chose different colour pallets making it confusing when people ask in chat and get the answer " trace everything inside the lines from the blue seed" when their seed could be red or some other colour.

Having the option to use several colours if needed on a difficult trace could probably both make it easier and save work if you could delete everything in one colour with discard instead of needing to manually remove things.

to be sure it did not get confusing it would probably be smart to add it to the explore button in some visible way instead of having it on a hotkey, people are pressing without knowing.
When there was more active mentors we sometimes watched each other to get more colours too work with on really difficult traces.

I like the idea of it being a modification of the normal explore mode button. A long-press, perhaps?

I’m usually tracing in explore mode, then retracing with cyan for the parts I’m totally sure of until I get stuck, then explore is for places that need extra attention if I ever need to summon someone to help with a cube.

i was thinking more in the lines of a dropdown menu, or a colour picker only visible when in explore mode.

if you ask for someone to help you, what you have traced in explore mode will not always be visible to the watcher because of a bug(not sure if this is fixed or not). usually marking it in explore after the watch started or blink it on and of a few times will help make the area in question visible.

I totally didn’t know that. Oof. I’ll take that into mind when asking for help in the future.

What about making some sort of command to refresh selection available when entering someone’s cube?

Watch mode is a bit unstable and have its own life, and from what i understand a nightmare for the developers to work on. It is supposed to show both explore and normal trace, but sometimes it show only normal mode and sometimes nothing but seed or things added after the watcher jump in, but that is easy to spot, the dangerous part if you have something in explore mode that the watcher don´t see and then tell you all it good. Or the watcher add something you don´t see, usually in explore mode.