As a newly minted Scythe this summer, I had the pleasure of learning a whole set of new skills on Eyewire. The manual has been a great help (I keep it pinned in my browser to reference from time to time) as has the community. However, there are a few things I’ve only learned about through experience and through talking with other scythes, mystics, and admins. I feel these topics could use inclusion in the manual, as an extension of tutorial videos, or both.

If I hadn’t seen this from a fellow scythe who came in and reaped after I did, I wouldn’t have a clue what this was or what it meant. What I’ve since learned is that it means if you’re reaping, say, a wrong seed or extension, to check the parent cube and manually reap in the segment that should be there.

Ok, the manual mentions this term once or twice, and even explains how to handle them if you find them - but it never explains what they are, versus regular duplicates! (Side note: I also had a silly misunderstanding at first that overlapping cubes were duplicate segments. Maybe that needs to be clarified too?)

Honestly this is a simple concept but it’s not taught well: how to look for mergers or possible extensions through exploring the 2D (including in other cubes). It’s another term I didn’t hear until Scouting.

I’m not sure if this is their official name, just the one I’ve heard them by. We’re talking about those gloppy fill sections that look sometimes like they should be part of a branch, but in fact are something ‘interrupting’ the trace (example below). They’re a pretty common occurrence and cause of merger pieces but we only seem to talk about ink spills. 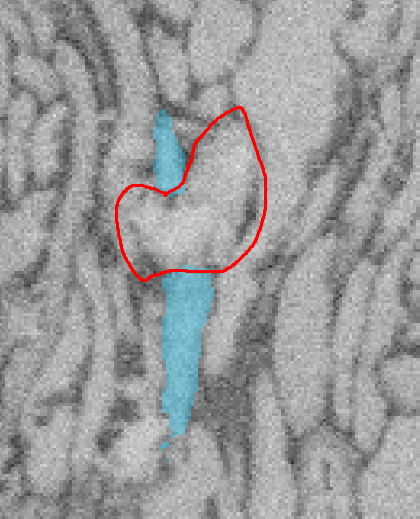 This is more of a video tutorial thing than something easily included in text in the manual, but black spill tracing is something that often falls on scythes and it’s not always clear exactly how to follow a branch in a black spill.

Also something more visually oriented; it’s clear they exist from the manual but learning to trace around these things is something of experience that isn’t taught otherwise.

I think that covers all the points I wanted to make but if I think of more I’ll add them in a reply here.

inter-half duplicates:
this i something that can happen when a cell is split in two (a and b), but because of a change where cells are split on a much later time than before they are not really happening anymore. only case i have seen the last half year, was a earlier grown branch from a cell that wasn´t finished that found its right place in a new cell. so should really be taken out of manual.