What do you think of the bottom buttons? Are the green buttons for Submit & Move On clear or confusing? If confusing, could you explain how? Anything you find frustrating?

In Reap interface, are there buttons or icons in the bottom bar that you find confusing or frustrating?

in reap mode i have had trouble with clicking on the red jump to duplicate when wanting to reap the cube, and then having had o start again on the cube. no idea why but think perhaps red is shooting reap to me.

I still have trouble with the reap vs the onward buttons, lol. Always try to hit the reap when i want to move on.

I’d also like some way to see the cube # of the parent and the kid without having to click onto them and leave the cube i’m in. In the old mode, hovering over the kid or parent would show the cube # in the jump button for them. With no button there, we lost that. The double click interval needs to be registered faster (as in, the required two clicks must be closer together, if such a thing is possible) for when we want to jump to a parent or kid. As it stands now, i can click to jump the plane, have it jump, decide i needed it slightly elsewhere, click again, and wind up jumped to the parent/kid, thus losing all of the work that I had done in the cube I was fixing. This is rather vexing. It means I need to either unsee the parent or kid every time I wish to use the jump plane feature or, never use the jump plane and simply scroll.

The biggest flaw with Inspect mode imo, is that it shows the player the cube before the consensus has been updated. This has lead to much confusion among unpromoted players who cannot also see inspect or weights. As those players are shown what they added is wrong, or that they missed a lot of trace, when, in fact, that player was correct but they were not seeing how their trace relates to the updated consensus. As an example: 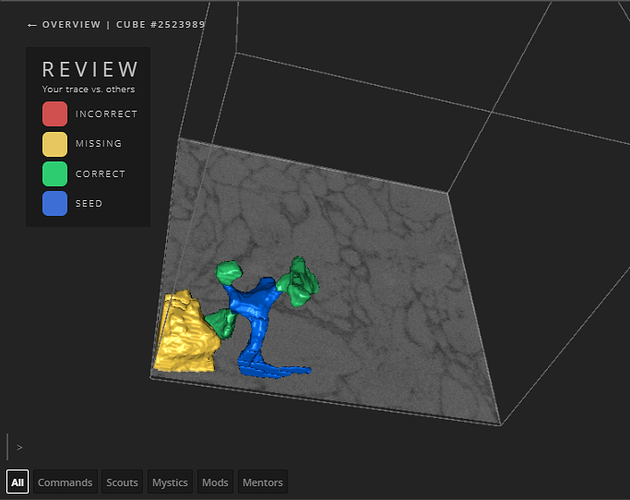 As you see, in review mode, it’s telling me I missed that large yellow segment. Now from experience, I know that segment has no right to be there. 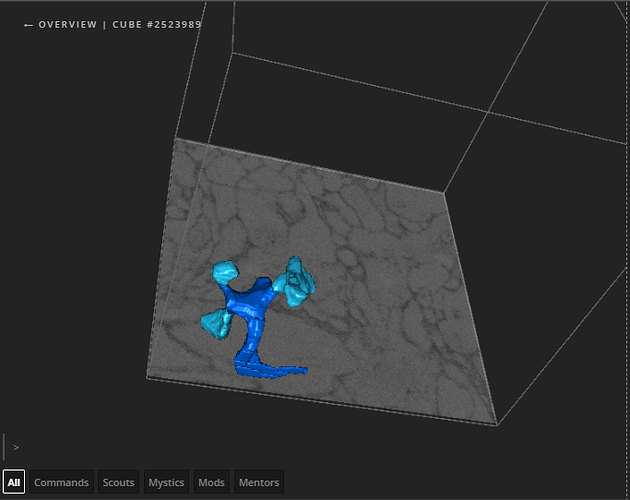 And in inspect, with updated consensus, it isn’t.

I think, imho, that it might be more functional, if review mode was tied to the new activity tracker (ie. click on the bar in the activity tracker to go there) and removed from the leaderboard popup, that would give slightly more time for the consensus to update so it might be more accurate. And also give the Mystic style review mode to scythes and scouts as well (which is an awesome feature!!)

Thanks for letting me give feedback!

yeayh, if only nonpromoted/non mystics could review from inspect like mystics can, (after spawner’s udpated stuff). lol

think using review from accuracy tracker would be better like atani said, but do not think the dubble click issue would help with having it closer together, like i am playing with a touchpad it is almost impossible to not doubleclick sometimes when trying to jump to a new place in cube.

Thank you thank you for this valuable feedback!

With the release of Activity Tracker, the consensus shown in review mode now includes your submission.

Seems we accidentally removed the ability to hover and reveal cube ID of parent/children with the UI change. We will get that added back.

I want to do more iterations on the Reap/Onward buttons and the Onward/Submit differentiation for regular players.

is Review mode having issue ? I have severals “missings” “Correct” and “Incorrect” errors… some missings which should not being part of and are not in consensus when i leave to OV (waiting a bunch for a refresh), parts appearing that i did not traced… what happen ?