Now that Notifications are live... what stats would you want to see?

We’re planning to add retro TBs with stats like:

We could also give a daily notification of personal stats if there is interest.

More to this point, I wouldn’t mind seeing if it was in our top 10 days in terms of points, maybe not see the entire list but “hey this was your 3rd best day on Eyewire!”

A notification if you get daily highscore with some info about send a email if you do not have the highscoore colour already.

Similarly, if you got a promotion (or any type of achievement that activates on its own rather than when you submit a cube, perhaps) you probably want a notification for that.

You guys may have already sent out notifications to our newest promos, not sure.

“Hey, you worked on [CELL], it’s now complete! Thank you for your help, have a look if you’d like!”

Since a similar question was asked on the features board (which is exactly where I stole this from) I think it could work for cubes played, as well as scouts/scythes/completes.

Thanks for these suggestions, everyone! We’re working them into the development pipeline!

@susi @annkri thanks for this suggestions. We’ll think about ways to improve filtering ability.

maybe not in all notifications, but for some i’d like to be able to leave a comment (viewable either by everyone, or specific ranks or only admins) in the notififcation. For example notifs. for hh/vs/weekly comp events etc I wouldnt care to leave a comment for, but for say promos, or whatev. policy update/change or big feature update etc it’d be nice, and i could see that replacing emailing hq for it, at least in some part.

It could also maybe replace having the admins ask our opiniion in mods for upcoming promos, instead they leave a comment <what do you think for <person for > they make it so that only ppl who are of specific rank can see the comment, we reply etc. It could maybe help in admins having a convo abt feedback, as is in done now chat ppl from dif. timezones are not present in the convo, admins are not online in their timezone (sleeping etc) and they never get to participate/give feedback, which excludes a portion of the community from something that may affect them, like this everyone (or everyone in a specific rank) can see it regardless of timezone, and in turn admins can see their comments when they log in.

And let’s face it, unfortunately, 99% of players don’t visit the forum, so having that convo here wouldn’t much help.

if we are to get such notifs. id very much like an option to deactivate from receiving them in the first place. Have options in gear cog or something similar where ppl can decide to enable/disable different kinds of notifs like vs/hh or these or whatev. and keep only certain types like feature updates or policy change non-disapable.

As well as recieving a notification when a cell is completed, it would be good to know when a new cell is released.

interesting idea. Would the notification disappear after 30 min or so?

Adding a 'Delete all Notifications" button would also help in keeping things tidy.

Bumping this thread. It may be a better idea to add a feature to the cell menu itself where it displays when each cell was released instead of making it an individual notification.
This is the menu I’m talking about: 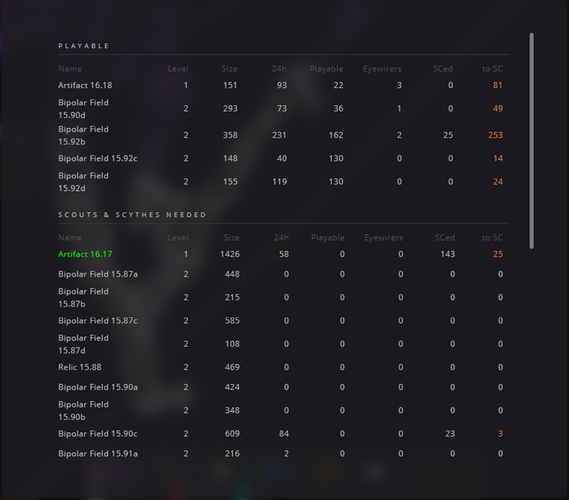 Thanks for the suggestion! Currently, there isn’t a notif for when cells are released so I’m guessing that you may be referring to the cell complete notifications?

I meant that instead of having a notification for every cell that gets released there should be a section in the cell list that displays the date of when each cell was released.
Here’s a more clear example (look at right side): 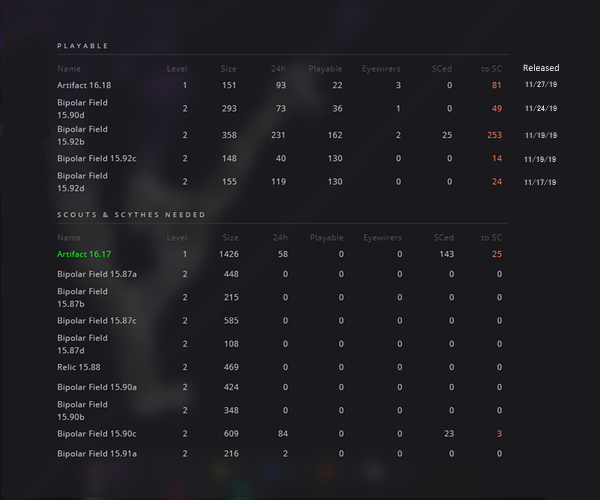 This suggestion doesn’t really have to do notifications but instead providing more info in the cell selection list (whoops). I only replied in this thread because I originally suggested that there should be a notification for every released cell but realized it would result in way too many notifications lol.

Off-topic here but how’d you get that SCed/to SC column? Is it already available somehow or part of your mockup? Because either way, I want it!