and some more, lol. 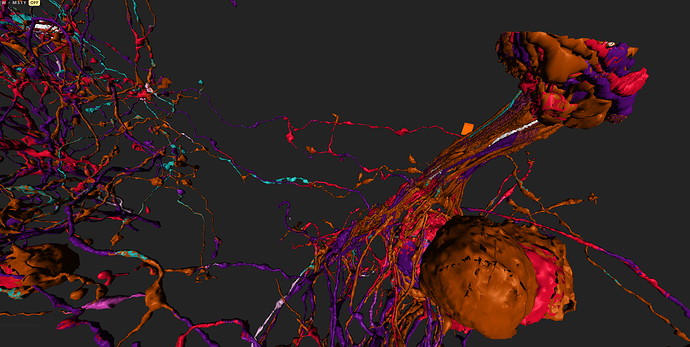 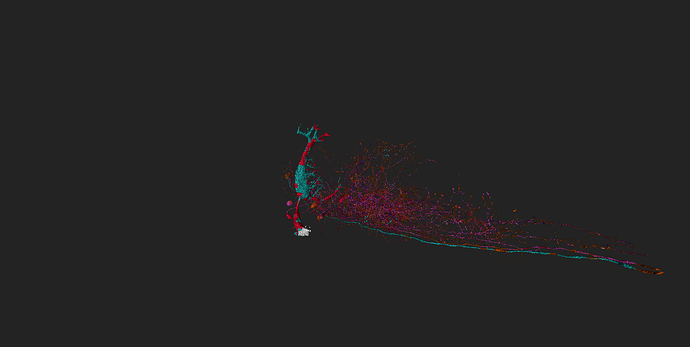 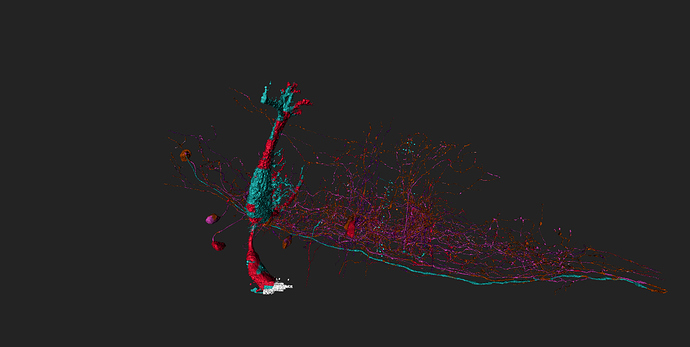 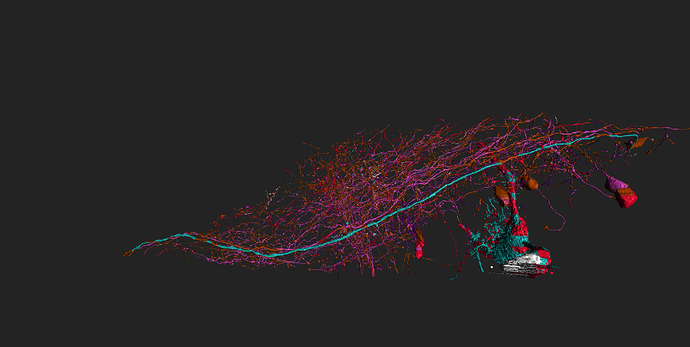 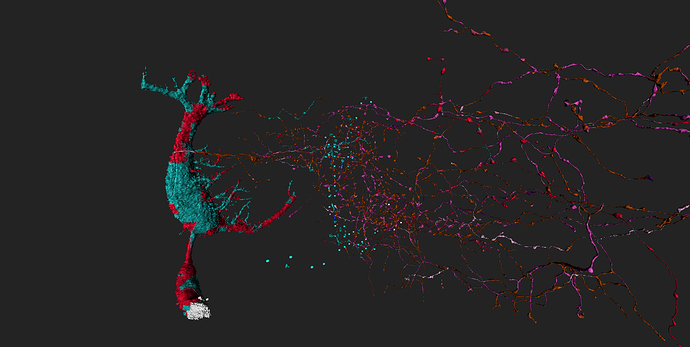 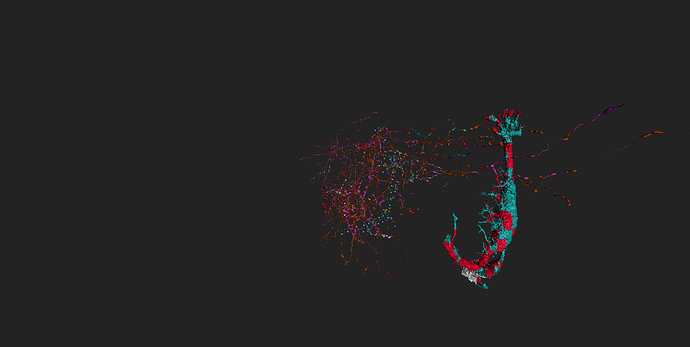 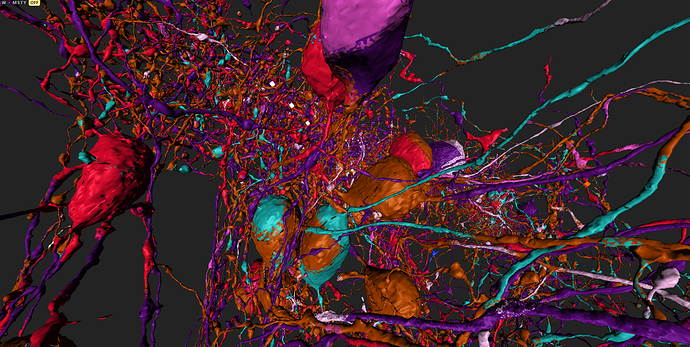 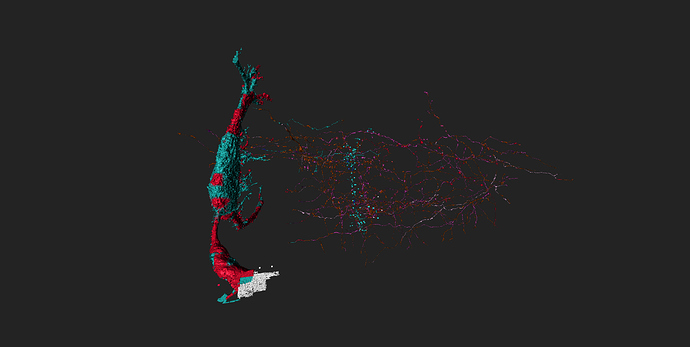 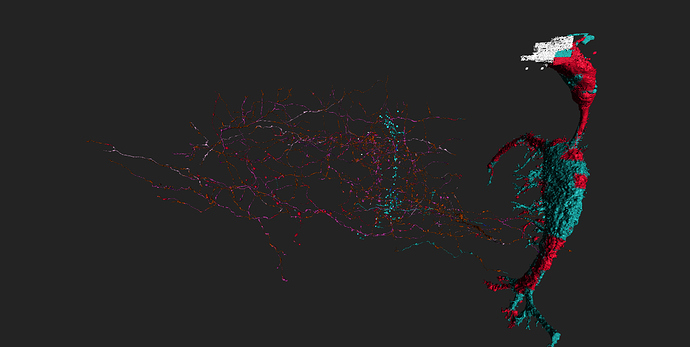 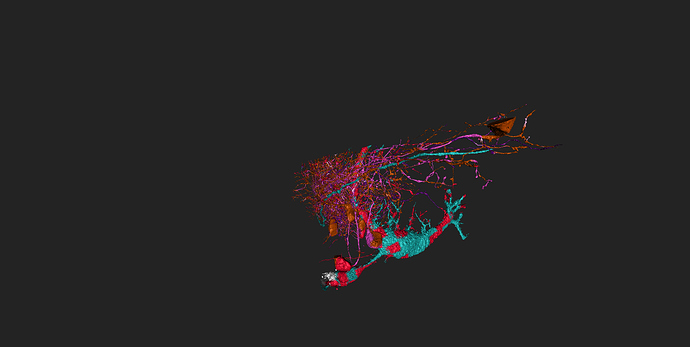 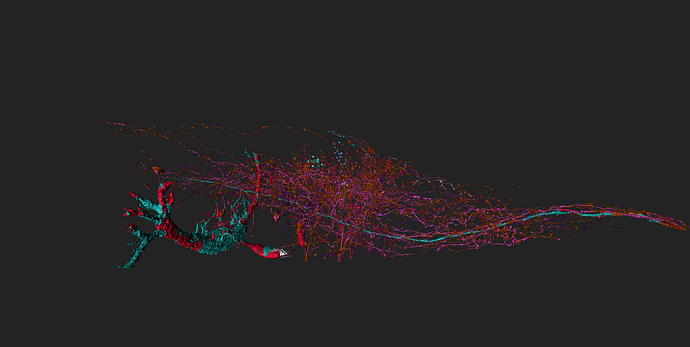 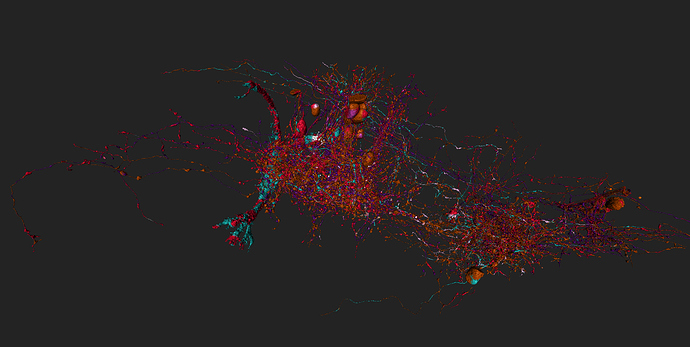 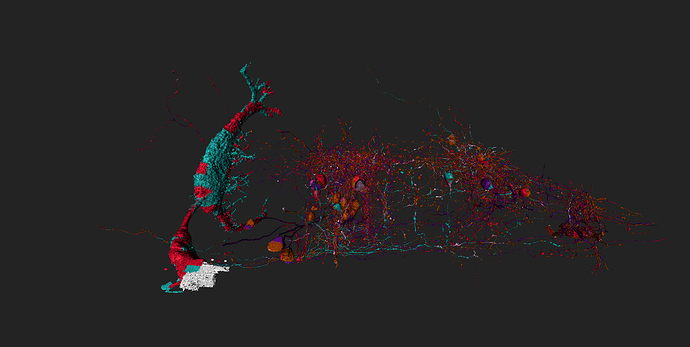 What a (beautiful) mess

For example about the cell types, like Ipsi-/Contra-cells (see blog: A few Mystic cells )
Pic 54 for example shows different groups of neurons with different orientations. Can you name them?

What is orientation for example in pic 43 (dorsal,ventral,medial,lateral)?
What sort are the thick, long neurons for example in pics 78,79?
What kind of cell is the beautiful big red-cyan neuron?
Can the original integrator-neurons be seen in the pics (like having their own color)?

@Nik : Just an idea: Can you create a pic showing one integrator neuron and some of the neurons synapsing with it (not the 100 in average as expected) so one can see better the connections? (and add the frame for knowing relative position in dataset).

I can, but I have no way of knowing which of the cells synapse with them.

some of (possible) synapses marked 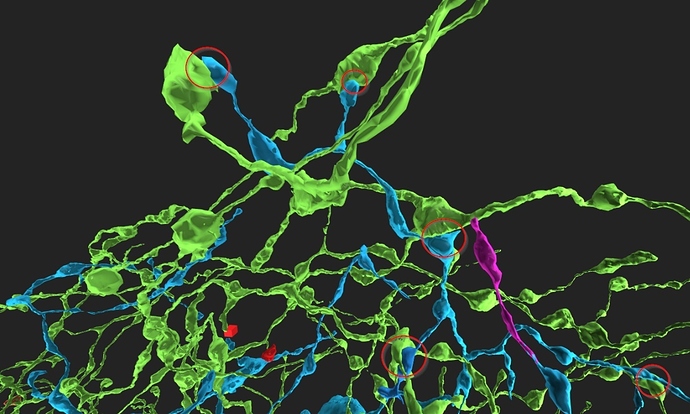 Whoa that’s a lot of cells!

Awesome! So many cells! @susi I’m posting this question to the zfish science team. They have an important site visit from out funders going on so it might be a little but before they can respond, but we will make sure they do!

These images are awesome @Nseraf! I am not sure how you are generating them, but assigning individual colors to each cell would be cool. To answer some of @susi’s questions

Most of those synapses marked in the following pics are correct, you can look at the 2d plane to see the actual synapse.

i /add-cell (and with crazy’s script I can add more than 1 cell per use of command (to max chars of the msg in chat about 10-20 cells per time I think) i can make abt 50-100 cells per pic before browser crashes lol (thus nearly 90 pics for 1700 cells lol) as to the colours i cant assign colour per cell, i just had scythe vision on and so all cells took those colours depending on the colours of each cells cubes.

You can select None as a heatmap and then each cell will have a separate color. With such big number of cells together, some colors will repeat, but still, they should be easier to differentiate.
Here’s an example with some random cells taken from The Registry: 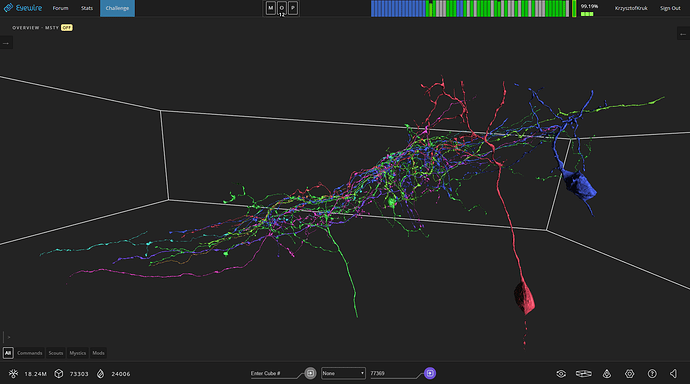 There are about 10 cells. Unfortunately the colors already started to repeat. But for a couple of cells, that might work good. I’ll take a look at the EW code to see, if it’s possible, to assign a color to a cell while adding it to the ov. Maybe a /remove-cell command would be useful too.

Also I saw it with my pics as well, but in your pic it is more apparent/evident. So, I find it interesting that some, at least, zfish cells seem to go diagonally rather than horizontal/vertical in the dataset, I wonder why that is? If it is investigated and so on.

Thanks very much ashwin for your explanations! And for the link, i will take my time to look into it!
If you have any ideas what we and expecially Nseraf could create which helps you, please tell