In the course of working on our notifications system, we’ve touched on competition notifications and thus been reminded that our competition scoring system is sort of dated, rather convoluted, and can scale oddly. After some discussions at HQ, we’ve come up with an idea for how we would alter VS bonuses, marathon bonuses, and HH bonuses; but since all of these changes would impact you, the players, far more than they would impact us, we would like to hear from you about whether everything we have in mind would still be fair and fun!

Here is the link to our suggestions: https://docs.google.com/document/d/1o6Y2x-FJl4vxTij5P_0uaeRLLr1Tnfd6KG7JN4dF8F4/edit?usp=sharing

Take a look when you can, and please share your thoughts here. We’ve tried to come up with schemes that are simpler (apart from the VS) but will still wind up earning you a fairly similar amount of points, or slightly-yet-realistically more. What do you think, though? And note that any changes would be implemented by the start of April at the earliest, to account for pre-prepared competitions this month and some necessary beta testing of any new scoring code. Thanks in advance for your opinions!

I remember as a beginner not getting too excited about competition, not being able to compete with the more advanced players. how about a separate category for best beginner player and best advanced player.
The simpler scoring is fine with me.

For the vs reward i think it would be good to also have a tier on 5000 =2500 bonus because the gap between 2000 and 10 000 is quite big and can be daunting for players that normaly earn little points or for players that see they do not have much time to play in the competition but still want to reach a tresshold value. Other than that the new vs system looks good to me.

For the marathon system i think i prefer the old system because i have a feeling that i have a big goal to reach 300 cubes. also the round numbers looks more impressive than if you would get for instance 31500. Personally i think i could get more points in average with new system because a lot of the time i do not mange the 300 cubes. but would lose some of the competition part of the game with that. Of course the people with really big cube counts would earn a lot more points with new system. The question is if they deserve more points for instance 10 000 or 20 000 bonus for each 150 cubes over 300. On the other side you could get more scythes willing to sc, but think the scythes that use to sc in normal cells also do in marathon.

Another thing to consider is if you want to give some bonus points tor people who nominate names or nominate the chosen name.

I like the new suggested HH scoring i think it would give a more fair bonus system and will give a bigger incentive to register for HH.

As for the suggestion from DT about separate competitions for beginners i guess you somehow could distinguish players under 1M and players over 1M where each group have separate high scorer in HH and vs but still contribute toward same team score for vs. for marathon it would be only be to be more visible in the top scorer list.

“Another thing to consider is if you want to give some bonus points tor people who nominate names or nominate the chosen name.” I like this

I am in favour of the changes, especially in marathon I think it’ll favour the fast tracers/players a lot but that may also become a problem? I mean it’s roughly 130k for 2k cubes which under normal circumstances is not easy to do lol, evident by how only 3 players/ppl have done so in 5 years of ew lol (crazy > me > atani) but if roughly 2k cubes can give roughly 130k then maybe ppl will go “hmmmm then 3k cubes… # pts?!” so maybe attach the # of cubes to accu? like:

The marathon changes are going to be a big incentive to trace more cubes imo, which is a good thing may motivate ppl to finish cell(s) faster, but without some % attached it might also be a motive to cheat? dunno but that’s my 2 cents on it.

As to vs: I agree with annkri and would add a further threshold (5000 or 6000).
The boni you give in vs are rather low when compared to other competitions, and Bonus for winner team very high. It’s pure coincidence of whether you are in winner- or looser team (actually in the many vs I did, I was in winner team slightly above 50%). It’s not fair when for example player x makes minimum of 2000 points and gets 11000 bonus being in winner team, and player y in looser team makes 20000 points (x10!) and gets only 10000 bonus. As mentioned above, it’s 50% chance, so over the years there is a balance. Still for me, looking at points I can earn, vs are not attractive

To marathon:
New system ok for me. Though: I am quite sure I will make less cubes in the future. 300 cubes for the 40000 were always big challenge for me, more effort than usual. In new system, not reaching the 300 cubes, still gives me good points (@Nik just opposite you suggest

. There are not many players which can do more than 300 cubes just from time available, though profit from more boni for these is fair) Perhaps you add some thresholds like every 50 cubes.
What Nik says to accuracy: Agree to also look at accuracies.

To HH:
New system without thresholds is ok.
Very generous! But I guess factor for bonus should be base score x 0.5 instead of 1.5 and 1 instead of 2? 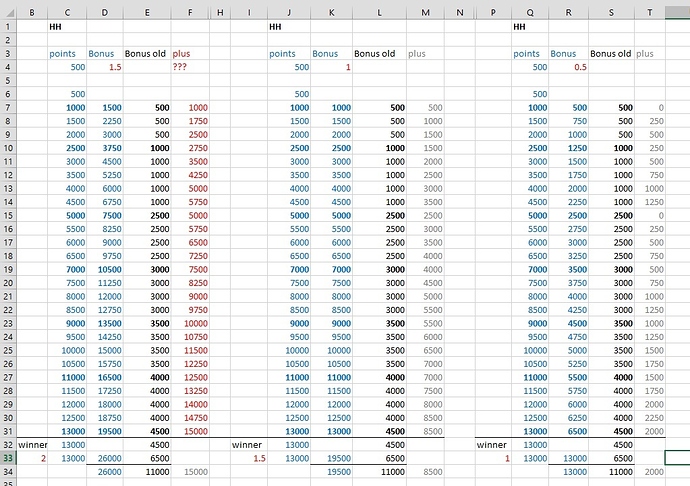 Late to the party here, but here’s my 2cents

I very much agree about making an additional tier between 2k and 10k. We already see a lot of players going to 2.5k then stopping, I am concerned that by lowering the minimum score to 2k we will see much of the same, but if there is another tier, we might be able to convince some of those players to hit the 2nd tier. Which would be beneficial to the entire team.

I’m also unsure about a complete cap on the bonuses at 10k, it feels like punishing players who are having a good tracing day. If you want to discourage players from continuing to play after 20k points that’s ok, but at least a nominal amount of points is better than none at all.

There is a potential for a player to get a LOT of points with the new system (not saying it’s a bad thing, just pointing out the obvious) and I would suspect that there would be a lot of potential for abuse of it. I’d think that some sort of minimal accuracy requirement to get the bonus points will wind up being necessary. (something like 50 or 60%)

I like the idea of not having thresholds but think susi is correct, x0.5 and x1 seems more in line with points that can be earned in other competitions. And tbh, if there’s a fort available it’s easy for scythes to get 50k+ in an HH, so awarding 100k for that seems like a bit much imo. (cannot believe i just argued for LESS bonus points)

With the proposed system the VS is definitely the loser as far as bonus potential, if the HH was brought down a little bit it wouldn’t be so stark.

Do like that y’all are tweaking this, and thanks for asking for feedback!

i kinda like the idea of hh giving more bonus points, so what if instead of lowering hh vs was increased to hh? Then vs is not the loser of the three events.

I do agree about the inbetween/lower tiers as well, and maybe for even lower like,

I believe it may work like bait like this “oh look i have 500 bonus, next one’s at 1k, hmmm i have 1k next one’s at 2k that’s not too far away” and so on with smaller increments between bonuses it can work beneficially for both the team and the vs as a whole (and get more cubes/cells traced lol).
I think the large increments between bonus tiers is detrimental, especially to the players who don’t normally trace more than 2-10k per session/day. If someone traces 2k normally then leaves, seeing 2k bonus then 10k is not going to make them trace to 10k, they probably just leave and come back later.

Looks like i am alone liking the old marathon system better but what about having the treshold lvl on 50 cubes instead of 25 on the higher lvls like 100-150-200 instead of 100-125-150-175-200 and perhaps give a gold, silver and bronse medal instead for the old tresholds

Not sure vs will be a loser in bonus points it will still be more bonus than it is today.

I think we’re still digesting the rest of these comments, but yes, you are correct that there’s no cap on bonuses for the VS. “Tier after” and “bonus after” means for every additional ### points after the third tier, you earn ### as a bonus.

@all also: thank you for your feedback! We will probably discuss it at HQ soon. Please be aware that some of the suggestions you’ve made for overall competition improvements are not things that our current database architecture would be able to do. But we will review the concerns raised about our proposed changes, and we can talk about your other suggestions that remain in the realm of feasibility, too.

A little update: we’ve now had a chance to review this feedback together. FYI, since it sounds like the only concern about the HH scoring was the way it was phrased, we’ll make sure it’s clear whenever we make the change. As for the requests for optimizing the VS and marathon scoring, a lot comes down to adding further tiers in between or above given tiers; right now the competition architecture in the database doesn’t allow for anything besides “1, 2, 3, After.” However, we have wanted to change that for a while, and we like your suggestions, so if we don’t have the architecture changed by the time we roll out the new competition scoring (which will probably fall just before or right when we roll out the notifications system), it is likely that we will take care of that stuff a little while afterward.

In the meantime, I should probably point out that technically, the VS has a bigger jump from Tier 1 to Tier 2 in the old (current) system, going from 5,000 to 15,000; so in the new system, even before we add an intermediate tier, going from 2,000 to 10,000 is 2K less difficult. ;D Anyway, when we get around to beta testing notifications with players, we’ll have more of an update about what to expect regarding competitions. Thanks again everyone!